It was a brisk and sunny Saturday afternoon when we got to our meeting point at the bs&s expo this year, A few skeptics, armed with our sharpened critical thinking skills, our good old baloney detection kits, and a list of the show’s exhibitors, but let’s go back a little and give you a better background on what’s going here. The local chapter of CFI Canada, CFI Saskatoon ,organizes a field trip to this expo every year since I have been here, usually a handful of skeptics and atheists end up going, and having a tremendous amount of fun. This year was no different, Plenty of exhibitors brought all the colourful and scented thingamajigs, most about energy healing, spirit this and that, chacra alignment, colour therapy, yin and yang. We even got to observe a psychic perform on stage

the art of cold reading, and trying to keep a speaking order among the spirits, some where speaking over each other and interrupting them, rude spirits, must have been an election year in the spirit world too. Then we had the pleasure of visiting almost all the exhibits on the show, i say almost, I got tired, and bailed out to have a rest bit, only to joined a couple more of my friends. But let’s not jump the shark here, there where some interesting exhibitions if you could get over all the supernatural qualities of the sold items, Interesting collections of minerals and stone formations where on offer, I even picked up a couple of magnetite stones, fairly large, and very nice once i might add, 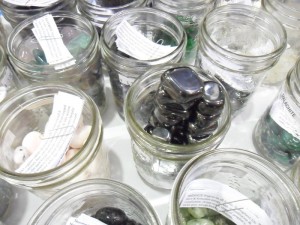 they even had magical powers, namely attracting and repelling other magnets and iron items. Tho I am pretty sure they also had some effect on my soul too, if I had one. By the way, do I have one soul or a quantity of soul, like five cubic litres of it? Can anyone elaborate on this nagging question? Could I be leaking or evaporating soul? Could I fall and brake it? Could I pinch it accidentally shutting the car door on it? Would it flap in the wind when I open my car’s window as I drive on Circle drive? All these questions where in my mind as I was looking at the exhaustive and meticulous collection of rocks and minerals displayed on the table. 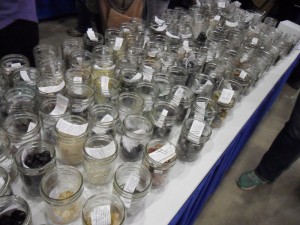 Some of these, I am sure would have been quite difficult to get, judging from the quantities available, and the price-tags attached. Moving on to other exhibits, one couldn’t miss out on some of the brilliantly prepared fossils, with added spiritual powers of course, very well cut and shined samples where presented, at somewhat elevated price, given that none of them where particularly rare samples, but I can appreciate the good craftsmanship going into the cutting and the shining work, weather they actually possessed the healing and strengthening powers attributed to the, I have no idea. Just take a look at these here, 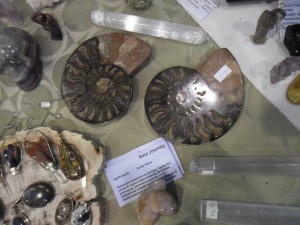 and you see what I am talking about. There where other fossils available, this image is just to give you a general idea about the quality and quantity without an attempt to cover the entire variety of the displayed items. Some of the displays where simple cute and nice, with no woo woo attachments apart from being cute and nice, which really doesn’t qualify them as woo woo, one of these exhibits was basically the handy work of a group of highly skilled glass artists, they would make a large number of colourful, very detailed but tiny glass figures, very adorable and

very decorative if you are into that sort of stuff, here take a look, and you get a pretty good picture. I was impressed with the detail and artfulness of the glass workers.  Every little item is made of glass, and the lady is holding the picture of her team in their workshop where they make these awesome peaces of art. Great stuff, but we are not done yet, the best is still to come, yes there is more, and it does get better, or worse, depending on how you want to use the language to express yourself. The next exhibit is nuts, literally, nut shaped humidifiers, 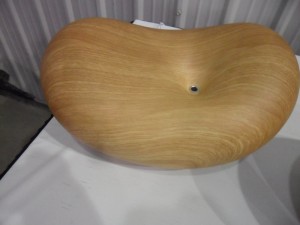 should win an industrial art competition if you ask me, unfortunately they are for essential oils, essential oils to prevent some serious diseases like rabies, yes, they had an essential oil to strengthen your pet’s immune system and prevent the onset of rabies, even claimed to negate the need for vaccinating your pet against it, not only a harmful preposition, but also a dangerous one, rabies is deadly, to your pet and surrounding humans alike, if not vaccinated against it, it’s one of the most painful and retched ways to die. Very bad idea not to vaccinate against it. The vaccine in the case of rabies turns out to be very effective, and can stop the infection even when administered soon after the byte. But don’t take my word for it, rabies, meningitis and tetanus are some of the worst ways to go, do ask your doctor or health care specialist about vaccinations, and do get vaccinated when possible. Strolling along the exhibits, we pass by a number of jewellery sellers, they don’t condone the woo woo part, but are just selling their stuff, not bad work, some of it was quite impressive and beautiful, but then I found this; 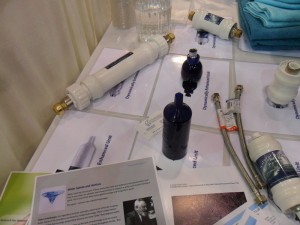 A homeopathic water filter. Yep, you heard it right, a water forgetter, it makes the water forget the trace elements, lead, poisons and chemicals that it encountered. At this point even if I gave then the benefit of the doubt, and assumed that this is a simple ion exchange filter, which i have no reason to believe that it is, i would still be remiss not having serious apprehensions about the homeopathic forgetting abilities claimed this product had. The guy literally said, it resets the water’s memory. So there you have it, a water forgetter, weapons grade 50c woo woo. To wind down the excitement, here are two more examples, I found them nice and interesting woo woo,

the first one is the hot and cold stones, the white once are the cold stones, the black once are the hot once, I asked her about how hot, her response was 170 degrees, could not get her to say Celsius of Fahrenheit,  so we remain at 170 degrees something, supposed to cure what ails you, there is also an assortment of essential oils you can snort while screaming from the first degree burns, and the frostbite. The next one, 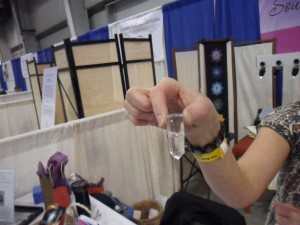 is crystal energy healing, and chakra alignment, colour therapy stuff, it was complicated, but so powerful, you have to hold it away from yourself, to avoid the side effects. This is but an example of a dozen of so other, energy crystal, laser, chakra, aura healing exhibits, slightly different flavour, but essentially the same kind of woo woo. There where at least a hundred exhibits, and I only visited about 60 or so, before I was overwhelmed and needed to have a break. Maybe next year, I will train up for the event, so I can last longer, and be able to finish the marathon. Until then, your comments are welcome, in hope this would start a vibrant discussion in the comments section.

A blog item, first light
My monument to the Orlando Pulse shooting victims